Shown here are some examples of projects we have worked on. The scope is large, ranging from rescaling pipes to complete new organs within the old case or chamber. 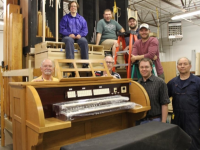 Many times the work needs to be done in a wood shop rather than in the church. Our office and shop in Maple Grove is where we construct wind chests, repair and … More 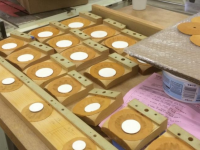 Following a particularly snowy Minnesota winter, the Spring thaw revealed an unknown leak in the roof at St. Luke's Episcopal Church in … More 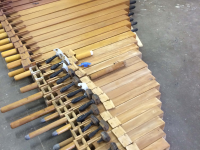 We were called in to evaluate a very small organ at Faith Lutheran in Prior Lake. Various electronic organ salesmen had declared the organ dead. In just a … More 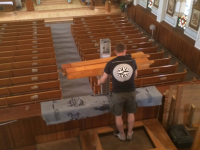 St. Mary's Ridge outside of Cashton, WI is a beautiful church that has been restored to original 19th Century splendor. The final piece was to resurrect the Schaefer organ, … More The organ at First Congregational in River Falls is in a chamber under the church tower. With two walls and ceiling exposed to the outside air, … More First Baptist Church in St. Paul, very close to the I-94/I-35E intersection ("Spaghetti Junction") is a very old and historic church with a Steere and Turner organ … More

This organ had received complaints ever since it was installed in the late 1960's. While well built, it simply did not have enough … More

We were brought in on an emergency service call to do some pre-concert tuning. We found this large organ terribly … More

Originally a tracker organ by Marklove, this organ had found its way to Peace with some pedal stops from First Presbyterian in Rochester … More

Designed by Paul Manz who taught here, this was one … More

The Reuter organ at Gethsemane was installed in the early 1960's and was prepared for addition of a Choir division. When … More

An otherwise well built tracker organ by John Nordlie has suffered the typical effects of age. The stop and … More